During the 6th and 7th centuries, when Persian and Arabic armies set out to vanquish the Christians, beacons were lit to warn the poulations between Jerusalem and Constantinople within hours. The Byzantine Christians of Cappadocia would pack up their belongings, gather their animals and move through secret tunnels into vast underground cities.

We visited one of the largest, at Derinkuyu, which could house the entire 10,000 population of the above-ground town and surrounding area. There are seven levels, with stables, churches, a meeting room, living rooms and sleeping quarters, granaries, wine stores, kitchens and air circulation tunnels. The tops of the air circulation tunnels were disguised to look like wells so if the invaders threw poison down them it fell harmlessly to the bottom. The real wells were within the rooms below. Smoke from cooking fires dispersed harmlessly into areas of porous rock underground. There was no sanitation so human waste had to be stored in pots until the coast was clear and it could be disposed of on the surface. The smell down there must have been a bit ripe! 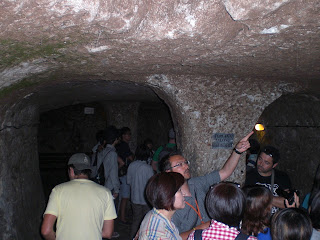 This was on a quiet day. At weekends it must feel like there are 10,000 tourists down there. 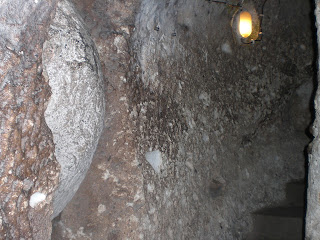 Stone wheels could be rolled from slots in the sides of the tunnels to block them and could be locked in place from the inside to keep the attackers out. 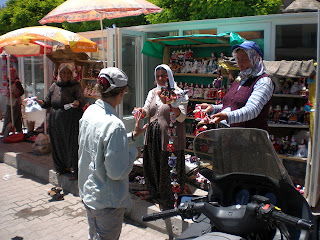 Back on the surface, near our parked bike, Gail was harangued by three doll makers. She ended up buying one from each of them at 1 lira (thats 60 cents) each. The last of the big spenders! In the meantime I was talking to a bunch of Canadians on Beemers who are doing a tour with a Turkish bike tour company, Bike Turkey Adventures. Their leader gave me his card and said if we have any problems in Turkey to give him a call and he will assist.

John
I'm a bit of an adrenalin junkie, which, combined with a love of travel, led me into motorcycling about 12 years ago when I reached the half-century. Since then my wife and I have ridden round every state and territory of Australia, and 17 other countries - mainly in east and west Europe. In addition we visited about 30 countries by more conventional means. She died tragically in Australia in 2012 after we did the Turkey trip, while I was motorcycling in India, but I'll always have the wonderful memories of those adventures with her.